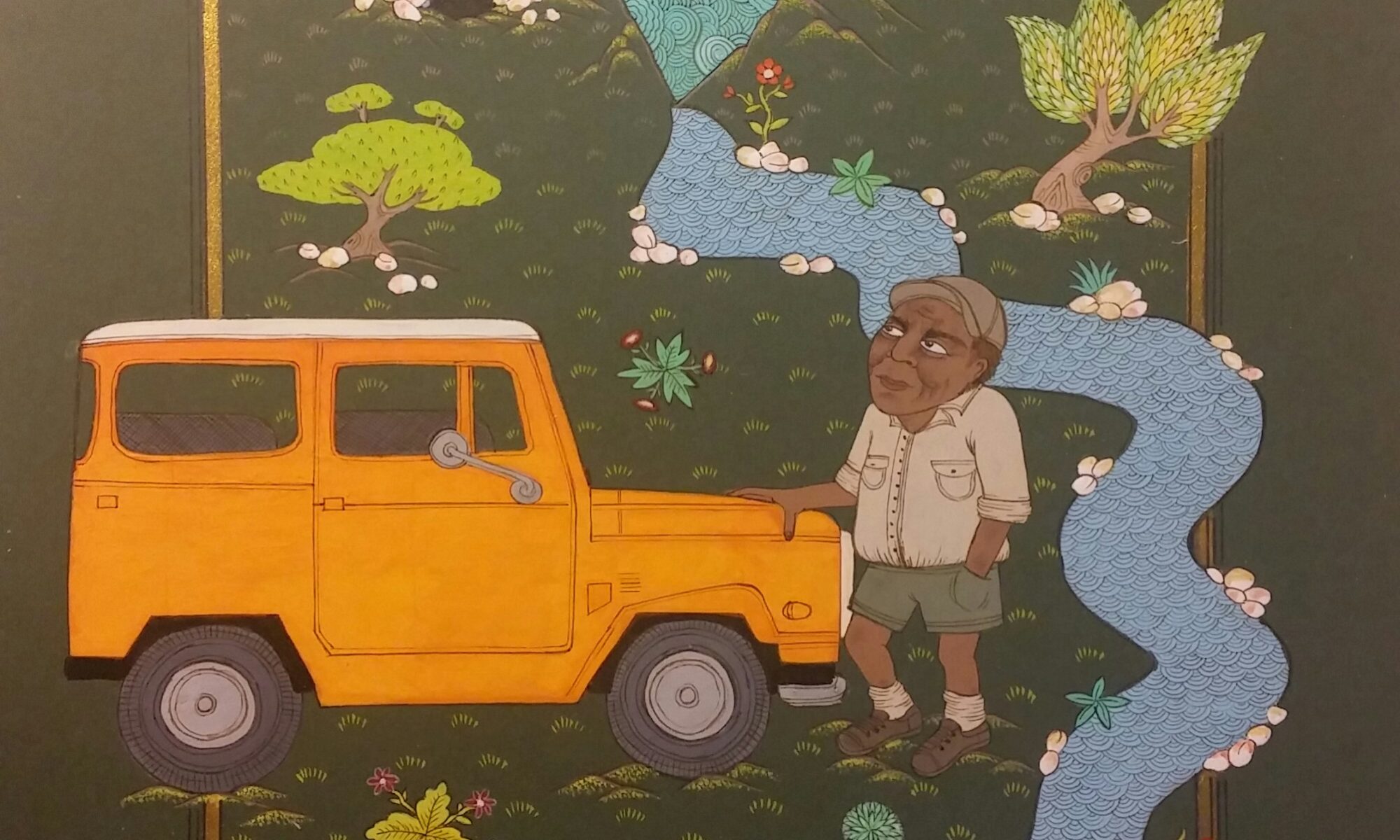 Back on the mainland, the truck is standing outside, all but loaded for the journey to the coastal lagoons.  A final circuit of the room to pick up the remaining vital items for the trip, the gun and the portable radio receiver and he quits the building.  After three hours in which the cab radio has competed with the rattle of the diesel truck he curses, stops the vehicle and checks the glove compartment without any apparent conviction, merely to confirm that the cartridges are still lying in the corner of the room.

The truck pulls up outside, he cuts the motor, he is passing through the first of the steel blast doors, his I.D. card is scrutinised, he passes beyond the second door.  He is positioned before a downward sloping corridor, which terminates in its own vanishing point, he is walking.  He is standing at the head of a perforated steel spiral stairway.  He descends.

His I.D. is re-confirmed, this time by another who cannot or will not speak.  He proceeds to the transmitter room. He is seated before the device; he glances to the left in order to indicate his readiness to the other operator, who returns his gaze with a studied neutral acknowledgement, calculated to dispel any emotional contact.  The surrounding atmosphere is perfectly conditioned.  They return their focus to the device, the dual keys are inserted simultaneously and locked to the right – a threshold is crossed, the transmission proceeds, its radiations emanating to fill every crevice of the known world.

He walks diagonally across the room to the opposite corner and stoops to retrieve the two cases of cartridges and, as a secondary measure, picks up some spare power cells for the portable receiver unit.  He is free to leave, he is seated behind the wheel of the truck.

The truck passes along a dry valley floor, moving over a pavement of rock slabs, which float in drifts of brilliant quartz sand, the fossil remains of some prehistoric beach.  Gradually the vehicle descends into the dense scrub which lines the lower reaches of the gorge.

At the creek he slows to a halt and out of respect turns off the cab radio, this creek flows down from the silent cave, a place that only the very old may visit.  On the driver’s side, to the north-east, the country eventually opens out to form the coastal plains with their lagoon systems, but to his left the massive jumble of dissected sandstone ridges continue unbroken, parallel to the distant shore.

She sits only a metre from the brightness of the creek.  From here her vacant gaze is filled with the movements of crayfish, creatures that promise such good eating.  This country will be her larder, an old lady’s privilege.  He lingers a while, his toes and the front tyres of the vehicle immersed in the creek.  Idly he considers how good the fishing would be here, but that will doubtless be his privilege in many years to come, he is bound to continue his journey, out of respect for the old, from fear of the Keeper’s censure and propelled by his desire to bag geese on the salt-water lagoons to the Northeast.

He imagines that he can already hear faint rifle reports drifting in on the coastal breeze, his brothers and sisters must be eating roast goose by now.  The truck fords the creek, the radio returns; goose and gun-sight eclipse in his mind’s eye.  The old lady remains motionless, a day, two days and then crawls into the darkness of the silent cave, carefully propping her spine against the smoothness of the rock surface.  She lifts her gaze to regard the fading light that inhabits the cave entrance, closes her eyes and is gone.

Throughout that night and for the following day the transmission continues, the two keys remain locked into the central control panel of the device, a guarantee against equivocation.  The room slumbers in a monochrome red light; the atmosphere is constantly re-circulated and monitored.  Many metres deeper the automatic power plant spins a thread of high voltage energy up through the device and onward to dissipation at the terminals of the antennae.

Around the shores of the lagoon the transmission rains down on the hunters camp, mixing with the smell of roast goose.  It irradiates the cabinets of their portable radios and enters the cabs of their vehicles but is unable to penetrate the tuning circuits or manifest in the small amplifiers.  Popular music, carried on different frequencies, grants the hunters immunity.

The transmission showers down on the Keeper, bathing his head and body with a foreign knowledge.  But then the Keeper is an old man, he doesn’t have a radio, doesn’t want one either.  He too is a master of the silent gesture, his conversations are with the departed as he helps them on their way from this place to the next.  He is the gatekeeper who ensures the living that this is a one-way traffic.

By now the dogs will have visited the old lady, she will be scattered.  The keeper must gather her up and install the bone pieces in a crevice high in the cave wall.  From here the old lady will be able to continue her journey without cause to return.  He sprinkles the floor with fresh water from the creek and very slowly sweeps the cave with a green branch.  It is cool under the overhang, it is always cool; a good place to sit and watch the crayfish.

The light has been fading for some time now, for quite how long it is impossible to estimate, it is only possible to remark that a feeble red glow remains.  Apparently the transmission stopped abruptly a day ago. It is now possible to imagine the faint sound of distant gunfire somewhere to the North.

And like the baseless fabric of this vision,
the cloud-capp’d tow’rs, the gorgeous palaces,
the solemn temples, the great globe itself,
yea, all which it inherit, shall dissolve,
and, like this insubstantial pageant faded,
leave not a rack behind.  We are such stuff
as dreams are made on; and our little life
is rounded with a sleep.

Uncle stalks barefoot through the rough underbrush.  With his grizzled chin and prolific curly grey hair I can’t make out how old he is, anyway he probably doesn’t know either.  The jungle floor is littered with abandoned ceremony sites, huge bleached wooden carvings set about earthen mounds, their significance fading at the conclusion of the ritual, to be slowly reclaimed by the verdure and the annual burn-offs.

Uncle points to a blackened tree, “Over there” he says, “I speared ‘im, that Jap fella, buggers plane in the lagoon,  see.”  Uncle points again towards the shoreline and tells me of a couple of other airmen he speared, after they bailed out of their Mitsubishi G4M heavy bomber, during one of the raids on Darwin.  Uncle must have barely been a teenager then, recruited into the North Australia Observer Unit, patrolling the endless coastal stretches of these tropical islands.  Horrible way to go but these islanders have always been pretty fierce and have never needed the imprimatur of a government to maintain their sovereignty, even so it is hard to imagine this dignified and wise old man skewering a group of terrified boys from Tokyo.

Eventually we clear the fringe of the jungle and walk back into the settlement.  I politely decline an invitation to join a poker game being conducted under a massive fig tree by three old Aunties, on the grounds that they are playing with several decks of cards simultaneously and that the stakes are rising to two thousand dollars.  They would have me for breakfast in a trice!

Uncle parts with the slightest of nods and the faintest smile and I head back to my bivouac perched atop a clay bank adjacent to the straits.  At night my torch lights up the glowing red eyes of saltwater crocodiles who lie grinning at the waters edge, willing me to come down for a dip.  I will miss this place.

My rucksack is hefted through the loading door into the cargo net and I climb the creaking aluminum steps into the plane.  Airborne the Dakota hums softly as it bobs like a cork on the humid thermals rising through the haze from the warm shallow sea a thousand metres below.  The seats are shabby leatherette and chipped grey steel tube, straight out of an old school bus and the smiling Polynesian attendant serves tepid fruit juice from plastic cups.  Below, through the scarred perspex porthole, slide sandbars and snaking blue water channels that will eventually merge with the mangrove deltas and swampland of the North Coast.

Ironically I feel comfortable in this beaten-up crate, even though it must be nearly sixty years old, there is a softness and openness about it, totally unlike the claustrophobia I will endure on the final sector of my journey home, entombed in a 747.  I remind myself that when I get to the terminal I must find a novel for the trip, I have re-read my dog-eared copy of  The Tempest so many times that I virtually know it off by heart.

I wander around the half empty cabin of the Dakota peering through the portholes when, through a parting in the low cloud, an Ark comes into view floating on the milky swell.  An Ark hewn from Lebanon Cedar and with classical proportions, three hundred cubits long, fifty wide and a deckhouse thirty cubits high.  But as I look closer I see that the deckhouse departs from the convention and is circular in form with an open central court and what appears to be an apron stage.  And there moving about, not animals two by two but a troupe of players, perhaps even the original Lord Chamberlain’s Men transported here from Shoreditch, they look skyward at the Dakota and together take a formal bow.

Certainly somehow old Prospero must conclude this play, close the book and gently wake the sleepers from the dream that he has spun.  But how is the master-weaver, the one who beguiles and mystifies, who paints the virtual mise-en-scène within mens minds, to dispel the haze of illusion and gently bring us back to reality in a world that is ill at ease?

For indeed his is an art that deals in balance, where tragedy plays out an inexorable logic, but ultimately a just logic.  Even when evil is present, when all is said and done, the world is painted as a moral place, and the drama is simply a drama, a storm in a tea-cup.

Down below on the deck of the Ark they are concluding the play, with its happy and satisfying resolution.

By my so potent art. But this rough magic
I here abjure, and, when I have required
some heavenly music, which even now I do,
to work mine end upon their senses that
this airy charm is for, I’ll break my staff,
bury it certain fathoms in the earth,
and deeper than did ever plummet sound
i’ll drown my book.

But who is to play the solemn music?