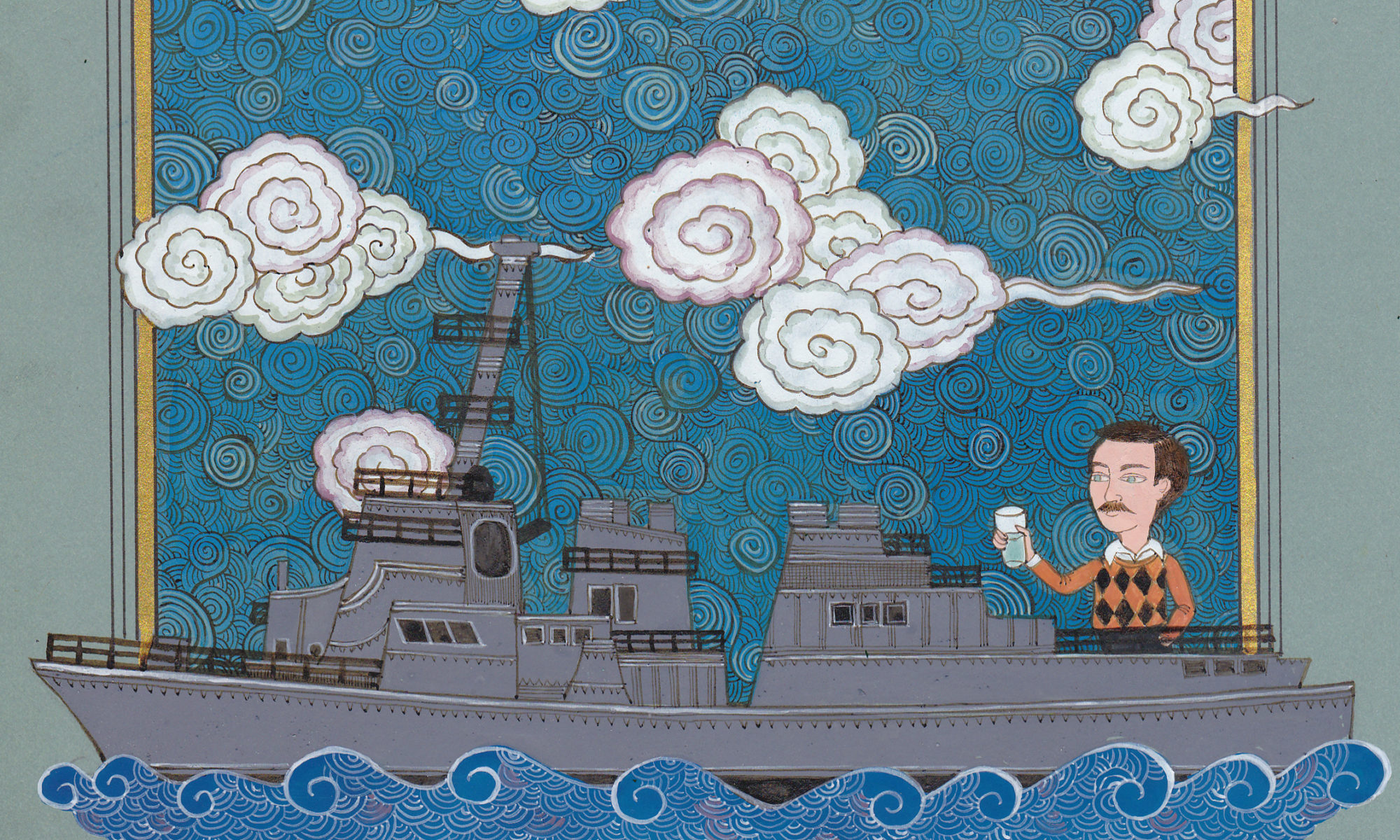 The schoolmaster, a tall laconic man, stands in his brown suit in front of a class of nine year old village children.  He is telling the class that before the war he had studied mathematics but was conscripted into the Royal Navy to serve on an anti-submarine frigate.  In a matter of fact way he recounts how his arm was broken as he struggled to free a depth charge jammed on the frigate’s afterdeck.  The children conjure up the scene; a terrified sailor struggling with the deadly cylinder.  They hear the crack of his bones, see the barrel-shaped charge slide down the trackway and topple over the stern.  They imagine the muffled explosion alongside a U-boat and see the plume of oily foam on the surface of the green ocean.

The teacher bequeathes one more memory.

The class listenens wide-eyed as the teacher launches into an exposition on molecules. He begins by drawing a statistical comparison between the number of water molecules in a litre of water and number of litres in the global ocean, the ratios are roughly equal.   Next the children learn that a human will pass approximately forty-five thousand litres of urine in one lifetime.  The teacher smiles, hey presto, his calculations show that in every glass of water we drink, at least ten thousand water molecules would have passed through the unitary tract of Julius Caesar.

After a predictably noisy reaction ripples across the class the facts slowly sink in.  The minds of the sharper children have already reached the conclusion that these statistics would apply equally to every living person since the time of Caesar, ipso facto we are all drinking pure piss!

Enzymes flow onto the food scrap and are syphoned back into the digestive tract. Molecule No. 51 forms part of a vast ocean of semi-dissolved nutrients that will power this humming engine.

The fly retracts its proboscis and gets airborne, gracefully circumnavigating the giant hand that is slowly describing an arc of serial freeze-frames.   Each staccato image illuminated by the pulse of a bare incandescent bulb that hangs in the centre of the kitchen, flickering out artificial sunrises and sunsets fifty times a second.   The fly has responded to this danger in under one hundred milliseconds and takes advantage of the pressure wave pushed ahead of the fleshy statue, fixing it with the four thousand lenses of its compound eyes, the fly navigates the strobing room to safety.

For the fly the pixelated image of the hand appears to move in excruciating slow motion but for the human eye that guides the hand, the fly simply vanishes from its meal to reappear somewhere else in the room, the slow mammalian eye hardly registering the escape act.

We live in the moment, straining to see the present, unable to read the past nor imagine the future.  The owner of the hand is as incapable of seeing the movements of Geology or the transformations of Evolution as he is of capturing the detail of the fly’s ariel course.

Somewhere out there, far beyond the event horizon a planet forms, cools and gradually accumulates a mantle of liquid water, warm and full of reactive chemicals.  Counting has to commence somewhere – the start point is frequently arbitrary.  Molecule No.51 is statistically part of the first

billion water molecules formed in this star cloud.  Eons pass and bigger and more complex molecules form and finally long chains of protein, some of which self-replicate.

Then it is all over, a change in orbit caused by a near miss  with a passing asteroid instantly cools the awakening planet, rendering it as a sphere of ice with a still-molten core.  Again the eons pass until the massive asteroid returns on its long elliptical orbit, this time it cleaves the ice planet into fractions, huge jagged blocks of frozen ocean spin into deep space.

The blue ice asteroid has been travelling through inter-stellar space since well before the Earth condensed from a dusty gaseous cloud.  No-one witnesses its arrival, there are no eyes as yet, nor for that matter anything that could develop an eye.  Earth is a barren globe of rock and lava.  As the asteroid passes near the sun it begins to lose some of its surface material forming a long incandescent tail arcing across the sky.  The impact with barren Earth transfuses water across the planet surface, releasing primitive lifeforms from their deep cryostatis.

Cushioned in a sac of amniotic fluid the foetus rehearses evolution, developing and then re-absorbing the proto-gills and proto-tail in a reprise of all chordate development.  Much detested by the creationists, Re-capitulation Theory was first conceptualised in the seventh century BE, not in biological but in linguistic terms when the Egyptian Pharaoh Psamtik experimented with young children to discover the origins of language, raising them without conversation to determine their first pure utterances (supposedly the Ur-tongue).  According to legend one of the children uttered the word “Bekos,” Phyrgian for Bread leading to the conclusion that the Phyrgian race preceded the Egyptians.

Perhaps somewhere deep in the primitive reptilian part of our brain stem, in the R-Complex that controls instinctual behaviour, terrioriality and ritual display we hold mnemonic traces of our original Mesozoic environment.  Pangea, the vast swampy island continent surrounded by a warm global sea, long before the single landmass broke up into separate continents.  Our voyage takes us somewhere between then and now…….