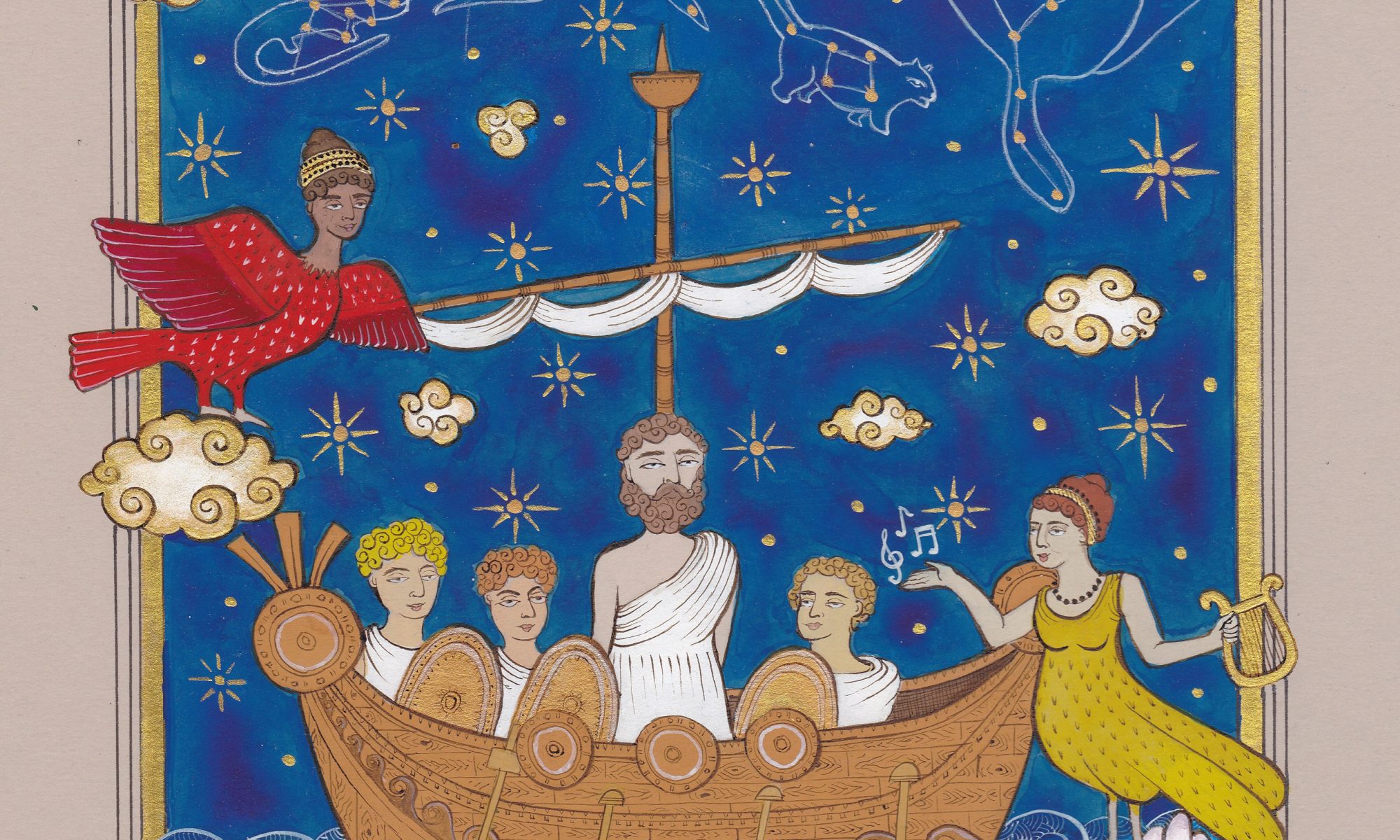 These heavy sands are language tide and wind have since silted here.

The land is our sure footing, our Terra Firma, our groundedness but my story is somewhat different, fluid and nomadic.   Alike to Odysseus, who after all that hard travel and the ugly episode with the suitors, was bade shoulder a ship’s oar and walk inland until he found a place where no-one could recognise his burden, to become at last becalmed and landlocked, finally at anchor.

Please allow me to introduce myself
I’m a man of wealth and taste
I’ve been around for a long long year
Stole many a man’s soul and faith.

Odysseus, the Man of Pain, sets out on his final journey knowing that, as prophesied, he will return home peacefully this time to live out his days in peaceful retirement, surrounded by his loving family. He will come to resemble his father Laertes, a kind old man living a simple life in the company of his shepherds and farmhands.

Now preparing for his final voyage, his wife Penelope dresses him in homespun. Girt by a leather twine and carrying simple provisions Odysseus once more he climbs aboard a blue prowed ship, leaving Ithica for the mainland, travelling this time in anonymity, not as a bold commander.   As he is carrying his own polished oar he makes himself useful and rows with the crew.  Like every other man on the benches, he wipes his brow with the back of his hand, smearing sweat into his hair.

Ahead there is nothing but plain sailing and his dotage.

With each stroke he leaves behind the complexity and the duplicity of his role as hero. The deception, dissimulation, violence and self-pity that have been his stock in trade for decades.  He struggles to reconcile the fact that he has spent the past twenty years attempting to get home – but has he?

Our hero recalls being cast ashore on Calypso’s Isle.  Day upon day perched on a cliff-top staring at the azure horizon, dreaming of his wife and home, sobbing and feeling sorry for himself.  But each dusk did he not succumb to an evening feast followed by a night of lusty embraces in the arms of the goddess Calypso, only to return the next day to the same routine of self-pity, the same self-loathing.  Did this not steal away seven years of his life? He has no answer.

Suddenly wind hit full and the canvas bellied out
And a dark blue wave, foaming up at the bow
Sang out loud and strong as the ship made way,
Skimming the whitecaps, cutting towards her goal.

Ironically the archetype and the man are destined to drift apart, the heroic role is hollowed out like a discarded helmet, the exploits forgotten, or forgiven, leaving a man with nothing to do, no future except domestic harmony and a gentle and painless death in his ripe old age.

When young Dawn with her rose-red fingers shone once more, the black ship makes landfall.  The oarsmen ship their blades and sit quietly on their benches as the cable is slipped around the drilled stone post.

Gathering up his few possessions he straps on stout leather sandals and takes leave of the ship, shouldering the brightly polished oar.  Odysseus walks through the town and away from the coast up into the foothills.  He walks for several uneventful days, sleeping in small villages, and once or twice bedding down in the forest, heaping dry leaves over himself to keep out the chill.

For once he is alone, unguided by immortal Athena and without the challenges of conflict or the tempests of the Seas to weigh upon his brow. Finally, as professed, he falls in with a fellow traveller who enquires why and to where he is carrying such a fine looking winnowing fan.  Odysseus responds….

And the prophets said that I must rove through towns on towns of men, that I must carry a well planed oar until I come to people who know nothing of the sea, whose food is never never seasoned with salt, strangers all to ships with their crimson prows and long slim oars, wings that make the ships fly.  And here is my sign, he told me, clear, so clear I cannot miss it, and I will share it with you now.  When another traveller falls in with me and asks of that weight across my shoulder a fan to winnow grain, then, he told me, I must plant my oar in the Earth and sacrifice fine beasts to the Lord God of the sea, Poseidon, a ram, a bull and a rampling wild boar, then journey home and render noble offerings up to the deathless goddesses and gods who rule the vaulting skies, and to all the gods in order. And then at last my own death will steal upon me, a gentle, painless death, far from the sea it comes to take me down, borne down with the years in ripe old age with all my people here in blessed peace around me. All this, the prophet said will come to pass.

As the key fits the lock Odysseus recognises the time and place.  He plants the oar upright in the ground, securing it with a tight cairn of limestone rocks, the final sea-marker on this last voyage.  He secures the Ram, the Bull and the rampling Boar; the sacrificial victims, from a nearby farm with a generous exchange of gold, that coming from such a plainly dressed traveller raises the eyebrows of the patron.

Odysseus prepares his rites to the deathless gods and goddesses.  The man of pain is finally released from the perpetual cycle of voyaging.  Like a young sapling the oar is planted, the gods appeased, his life is now without external challenge, but full of unfamiliar accord.

The churning chaos of Poseidon as he rammed the clouds together and the whipping gales of the wind gods shrouding over earth and sea with thunderheads, Aeolus, Boreas, Zephyr, Notus and Eurus are now without meaning for Odysseus.  The sea nothing but a dead calm, a permanent glittering backdrop to the island of Ithica, protecting its rocky slopes, its goats and its vineyards.

His epic, sung in dactylic hexameter, for centuries under shady trees, in small fishing villages, in the polished marble courts of palaces and intoned at the ink-stained desks of English public schools, pronounce the attributes of heroism, of arbitrary power, of privilege and violence legitimised by divine authority.  Centuries later to be reborn as an anti-hero.

It is eight o’clock in the morning on the 16th of June 1904 and Leopold Bloom is about to cast-off on his epic twenty four hour dérive across Dublin in James Joyce’s Ulysses.  Well, that is after bringing in breakfast and the morning’s mail to his wife Molly.  Henceforth heroes will never be the same again.

Think you’re escaping and run into yourself.  Longest way round is the shortest way home.

To all intents and purposes the show is over, a gentle country walk back to the coast, another short sail as a passenger and home for good.  The good citizen steps aboard the hollow ship with all the clumsiness of a farmer and sits scanning the crew as they pull against the oars of their galley, their blades tossing up the spray.  An irresistible sleep descends upon his eyes, the sweetest, soundest oblivion, still as the sleep of death itself, Odysseus dreams of the past…

We were just offshore as far as a man’s shout can carry, scudding close when the Sirens sensed that once the ship was racing past and burst into their high, thrilling song.

Forewarned by tales of Jason’s voyage in the Argo, when Orpheus saved the day, Odysseus took his sharp short sword and sliced an ample wheel of beeswax, moulding it in his two strong hands under Helio’s burning rays, making it pliable.  One by one he stopped the ears of his crew with the moulded wax.

The job done, two crewmen lash him tightly to the mast then return to their bench to row in silence, their waxen plugs reproducing the labyrinth of their pinnae, prefiguring the spirals of Edison’s phonography inscribed into wax cylinders.  In the silence each man replays the rhythms of his pulse, syncopated with oar strokes, to evade the deadly intoxication of the Syren’s song.

Entranced, Odysseus yells roughly at his men, demanding that they untie him and row ashore to the Sirens but the crew row on, oblivious to his rant.  Danger past, Odysseus scowls at his men who have steadfastly refused to release him to follow the Siren’s hypnotic call.

like a four course team careering down the plain, all breaking as one with the whiplash cracking smartly, leaping with hooves high to run the course in no time, so the stern hove high and plunged with the seething rollers crashing dark in her wake as on she surged, unwavering, never flagging, no, not even a darting hawk, the swiftest things on wings could keep her pace as she ran, cutting the swells at top speed.

Landfall; it will now only be in his dreams that he slaughters unarmed suitors, or disobedient serving girls, or rolls in the arms of a Goddess and cries out to harmonise with the Sirens.  No-one will listen to his loquacious tales of misfortune for they are no longer an advantage to this man of strategy and manipulation.  Trojan Horses make playthings for his grandchildren now.