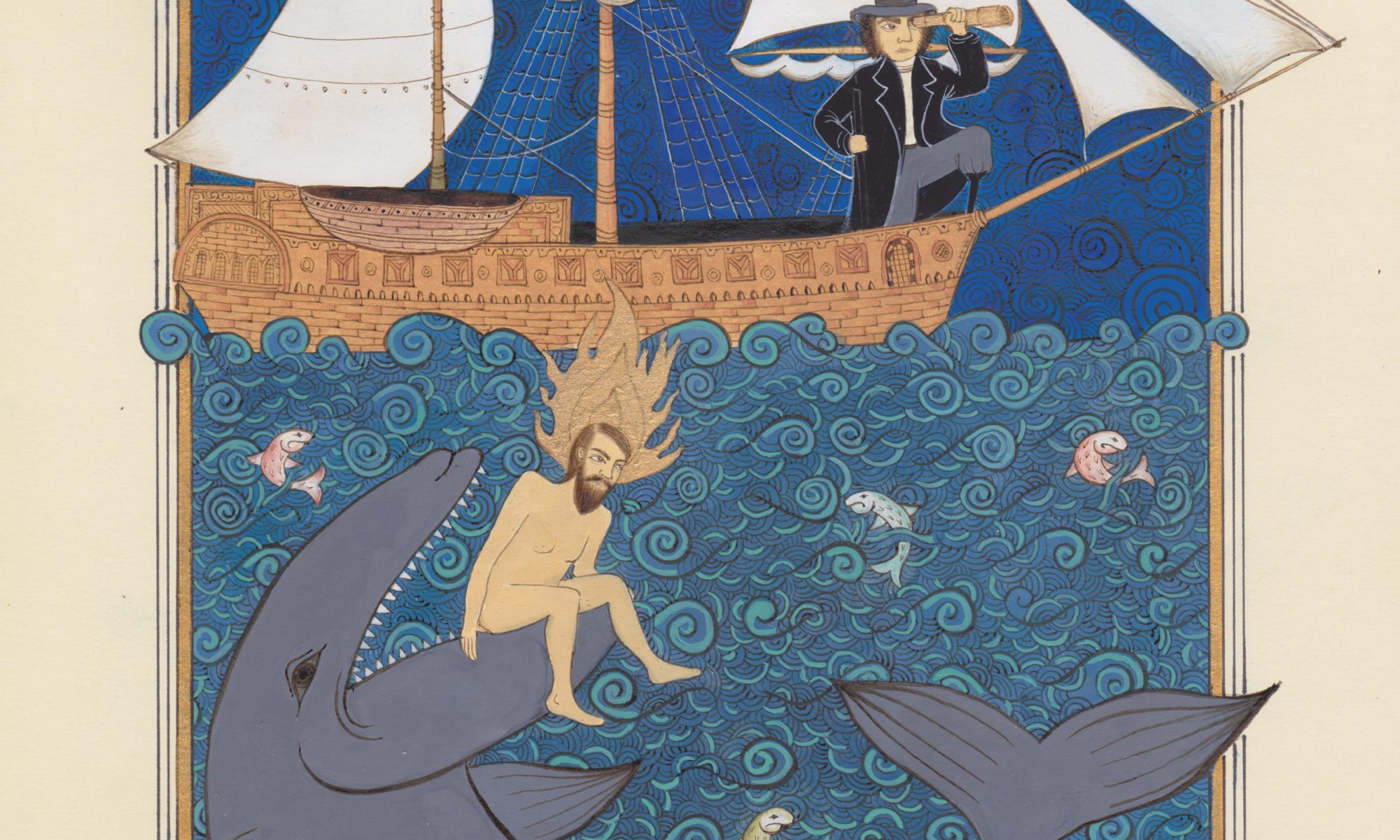 There is no life in thee, now, except that rocking life imparted by a gently rolling ship; by her, borrowed from the sea; by the sea, from the inscrutable tides of God. But while this sleep, this dream is on ye, move your foot or hand an inch; slip your hold at all; and your identity comes back in horror. Over Descartian vortices you hover.  And perhaps, at mid-day, in the fairest weather, with one half-throttled shriek you drop through that transparent air into the summer sea, no more to rise for ever. Heed it well, ye Pantheists!

Abe, like Ahab died at sea, both dreaming of the Leviathan.  Abe drifting on the outer arm of a synthetic spiral-nebulae, surrounded by a vast horizon of man made debris.  Ahab snatched by the snaking harpoon rope to be coiled and lashed fast to the scarred flanks of the White Whale, twisting and winding through the ocean like the whirls of Queenqueg’s indigo moko.

For many in this final image it is of course not Ahab but Gregory Peck who rides the beast down to Neptune’s depths, fulfilling the Faustian contract between man and nature.  Whilst Gregory Peck is more capable of playing Gregory Peck than the metaphysical depths of Ahab, the rest of John Houston’s 1956 Moby Dick is however true to Melville’s masterpiece, in that it is not simply the ill-starred Captain who meets his fate but indeed all of civilisation and society, symbolised in the form of the ship Pequod which after being rammed by the enraged whale slips beneath the waves, leaving nothing except the primeval chaos that is our Mother, the ocean.

There is no life in thee….Only Ishmael survives, clinging to Queequeg’s coffin, a vessel which should have sunk into the earth carrying a corpse but instead it floats on the ocean to save a live man.

Ishamael is delivered from his buoyant coffin and laid out upon the deck of the Rachael, water burbling from his sodden lungs, his spittle merging into the teak.

Ishmael is flotsam to Jonah’s jetsam.  Those with messages to tell are granted a reprieve; call me Ishmael.

So also was Jonah among those sent by Us.
When he ran away like a slave from captivity to the fully laden ship,
He agreed to cast lots, and he was condemned:
Then the big Fish did swallow him,
and he had done acts worthy of blame.
Had it not been that he repented and glorified Allah
He would certainly have remained inside the
Fish till the Day of Resurrection.
But We cast him forth on the naked shore in a state of sickness,
And We caused to grow, over him, a spreading plant of the gourd kind.
And We sent him on a mission to a hundred thousand men or more.
And they believed; so We permitted them to enjoy their life for a while.