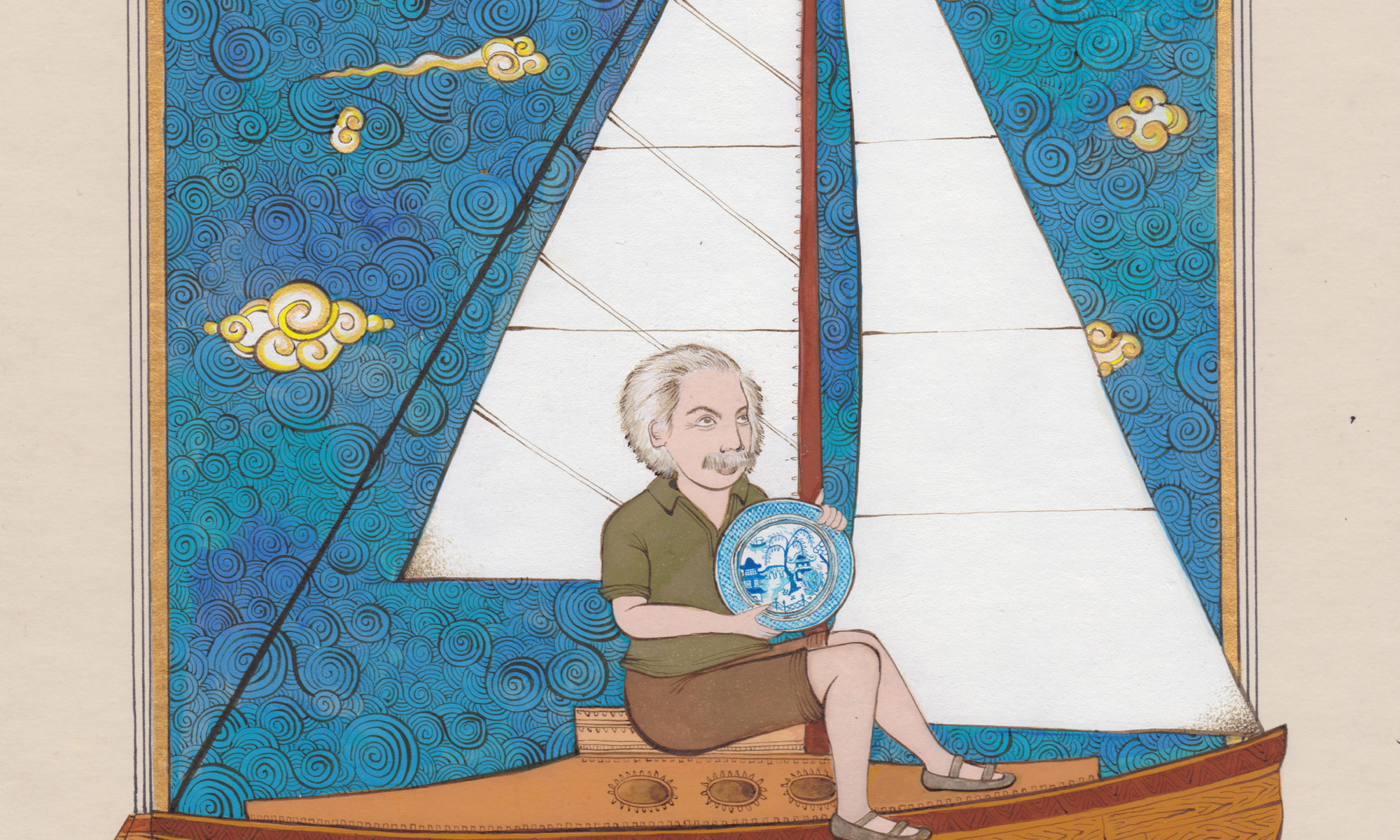 But even so, amid the tornadoed Atlantic of my being, do I myself still for ever centrally disport in mute calm; and while ponderous planets of unwaning woe revolve round me, deep down and deep inland there I still bathe me in eternal mildness of joy.

Einstein lays back sprawled across the cockpit in the delicious embrace of a dérive. His mahogany sailing boat Tümmler adrift on the  Templiner See the sails loosely sheeted, filling now and then in the zephyrs, the tiller unattended swinging now to port, now to starboard as the whim takes it. Einstein gazes up at the small summer clouds and tucks his well used violin under his chin, fragments of Mozart carry away across the Lake.

The Tümmler lies in the summer doldrums and Einstein chuckles to himself, thinking of the simple equation that describes kinetic energy.  Poor Tümmler has just about stopped dead in the water, which presents a perfect opportunity for lunch.  He takes the small clasp knife with a rosewood handle from his pocket and slices apple and Gruyere onto the old chipped Willow Pattern plate given to him by Fraü Markwalden, his landlady from his student days in Zürich many years ago.

He sailed there too, on the Zürichsee with her daughter Fraülein Markwalder and the pair remain avid correspondents, she ever reminding him of his passion for sailing linked to his inability to swim and his stubborn refusal to wear a life jacket.  He smiles to himself staring into the cobalt blue image of the oriental lake, on the calm waters of which drifts yet another small vessel, with who knows who on board, maybe a Chinese physicist from a mirror universe?

He continues to slice absentmindedly, gently gripping the polished rosewood, slowly squeezing the blade upwards towards this thumb through the flesh of the fruit. Motes of reflected light play across his brow and for an instant he imagines himself aboard the cobalt blue vessel dancing across the vitrified lake.

Then as the slice falls to the plate he imagines a polished red apple falling towards him, straight as an arrow, gravity sped through Newton’s Universe, through the linear voids of Descartes to strike him on the forehead.  At the moment of impact he imagines the Popish god who is desperately manipulating the orbits of the Planets into the likeness of a brass Astrolabe accompanied further off-stage by the soft chuckles of the Buddha, who resting on one elbow, beams the smile of an all-knowing and bemused parent.

And truly a trip on this Lake is a much more charming recreation than can be enjoyed on land. For on the one side lies the city in its entire length, so that the spectators in the barges, from the distance at which they stand, take in the whole prospect in its full beauty and grandeur, with its numberless palaces, temples, monasteries, and gardens, full of lofty trees, sloping to the shore.

And the Lake is never without a number of other such boats, laden with pleasure parties; for it is the great delight of the citizens here, after they have disposed of the day’s business, to pass the afternoon in enjoyment with the ladies of their families, or perhaps with others less reputable, either in these barges or in driving about the city in carriages.

Einstein’s Tümmler was a gift from his friends on the occasion of his 50th birthday in 1929.  He sailed her for the next four years until in June 1933 the craft was confiscated by the Prussian State and subsequently by the Gestapo, who curiously listed her as a speed boat.  As the little vessel is driven away from the lake in the National Socialist’s truck a trail of bilge water spills onto the dusty tarmac, which will soon turn to vapour in the midday sun, evaporating into the sky over Berlin as will democracy.  Despite postwar enquiries little Tümmler was never found again.

The speed motor boat of professor Einstein which was moored at a shipyard in Caputh near Potsdam was confiscated and seized for the Reich. Einstein is said to have planned to smuggle the sailing boat into a foreign country. The sailing boat is worth RM (Reichsmark) 25,000.

The small ripples of National Socialism slowly began to build into a giant tide of racism even on this placid lake.

Thirty years later my mother packed me off, a lad of twelve, to Whale Island, a Royal Navy sail training establishment in Portsmouth Harbour.  There we were marched at the double each dawn to physical training, were shouted at, cajoled and then doubled back for eggs and bacon and our days sail-training.  Thrown in at the deep end we learnt small boat handling, keel boat work and then ocean racing trials, which terrified me.

The lee rail constantly submerged, we hung on for dear life as the Kormoran, our huge ketch rigged racer, ploughed through the Solent chop.  Kormoran, a100 square metre boat impeccably crafted by Abeking and Rasmussen in 1936, was confiscated from the Germans at the conclusion of World War Two as a windfall yacht, to sail with Tümmler through a doppelgänger world.

The Physicist never really thought deeply about the plate that Fraü Markwalden had given him, nor the stories that lay behind it, the ironic product of two Empires in conflict.  Britannia and Cathay both regarding themselves as the hub of the universe but eurocentrism demands that the Orient play a secondary role in the arts and sciences, obscuring the real source of much Occidental Ars et Inventio by relegating the orient to the source of exotica, myth and superstition.

Underpinned by a long history of trade routes and sea lanes the two imperial centres engaged in a curious but problematic dialogue which ended ultimately in the Opium Wars and semi-colonisation by European powers in the mid nineteenth century, establishing an axis of power which we are only now seeing reversed.

However European commercial interests were matched at every turn by a fascination with eastern arts and culture, the complexity and historical depth of which predated and overshadowed that of Europe. Textile and ceramic wares in particular formed the basis for a huge trade, carrying with it a range of iconography which shuffled across the cultural divide, to eventually hybridise in both the Occident and the Orient.

The Blue Willow, or Willow Pattern ceramic design is a perfect example of this process.  Blue Willow was designed by Minton, an Englishman in 1790 and the design was initially produced by the Spode Pottery in Staffordshire. The design is based upon the longstanding tradition of Ming porcelain blue-ware, with specific imagery drawn from the lakes and gardens in HangZhou, notably the West Lake, which has a deep-rooted and popular place in Chinese cultural history, well documented in the Travels of Marco Polo.

The European image proposes a narrative, reputed to be based upon a traditional Chinese tale of unrequited love but is in fact essentially a European fiction, very much in the vein of Romeo and Juliet which only loosely follows a much more interesting Chinese mythic tale relating a love story between white and blue snake deities.

The vagaries of orientalism aside, to judge from its ubiquity the Blue Willow design is possibly the most widespread example of chinoiserie ever produced, with production quickly being taken up in China and Japan as exports to Europe reversing the original orientalist trend. Even today Wedgewood’s Blue Willow plates are manufactured in China by workers for whom the pattern is apparently without cultural meaning.

Without releasing her habitual grip on my arm, Yan Ping steers me into the lacquered pagoda that rises from a small promontory on the shore of the West Lake in HangZhou.  The young couple sitting on the polished bench, a thermos and dried squid snack between them, look up in mild alarm as Yan Ping produces a Wedgewood Willow Pattern dinner plate from her bag and unceremoniously begins to quiz them as to its provenance and cultural meaning.   The couple, transfixed like a pair of rabbits caught in the headlights, shift their eyes from a nodding attention to Yan Ping’s monologue, to a quizzical regard of the cobalt blue ceramic image, alternating with undisguised suspicious glances at myself, a mute and smiling Loa Wai casually pointing a microphone at the scene.

‘Orioles singing in the Willows’ is one of the ten principal poetic scenes on the West Lake and is probably the template for Minton’s 1790’s ersatz Ming Dynasty image.  Yan Ping is persistent and encouraging but try as she may the couple simply shake their heads in incomprehension, the glazed and idealised image of the lake and the sparkling reality lapping at our feet simply do not coincide for them.

Yan Ping makes a perfunctory bow and her grip on my arm tightens as she wheels me out of the Pagoda.

Two Birds a-flying high
A Chinese vessel sailing by
A Bridge with three men, maybe four
A Willow tree hanging o’er
A Chinese temple there it stands
Built upon the river sands
An Apple tree with apples on
A Crooked fence to end my song.

Einstein was not aware of the pathos of the European story hidden in the cobalt blue image.  A story of a rich mandarin with a beautiful daughter Koong-Se who is promised to one of her father’s old but rich merchant friends.  As one would expect of a tragic romance, Koong-See falls in love with a young and handsome (but poor) servant and they elope just before the wedding, stealing the dowry.

The young lovers commandeer the merchant’s boat and hide out on the island that appears in the upper left of the image.  Search parties fail to find them and the couple live in bliss for several years.  However the young man is both ambitious and talented and gradually builds a reputation as a poet, such that the whereabouts of the couple finally comes to light.

The merchant, is still furious and filled with a lust for vengeance, sends out a posse of henchmen, who burn the island house to the ground with Koong-Se inside.  In desperation and despair the poet throws himself into the lake and drowns.  But look toward the top of the image and you will see the two doves, who are the souls of the lovers reunited in heaven.