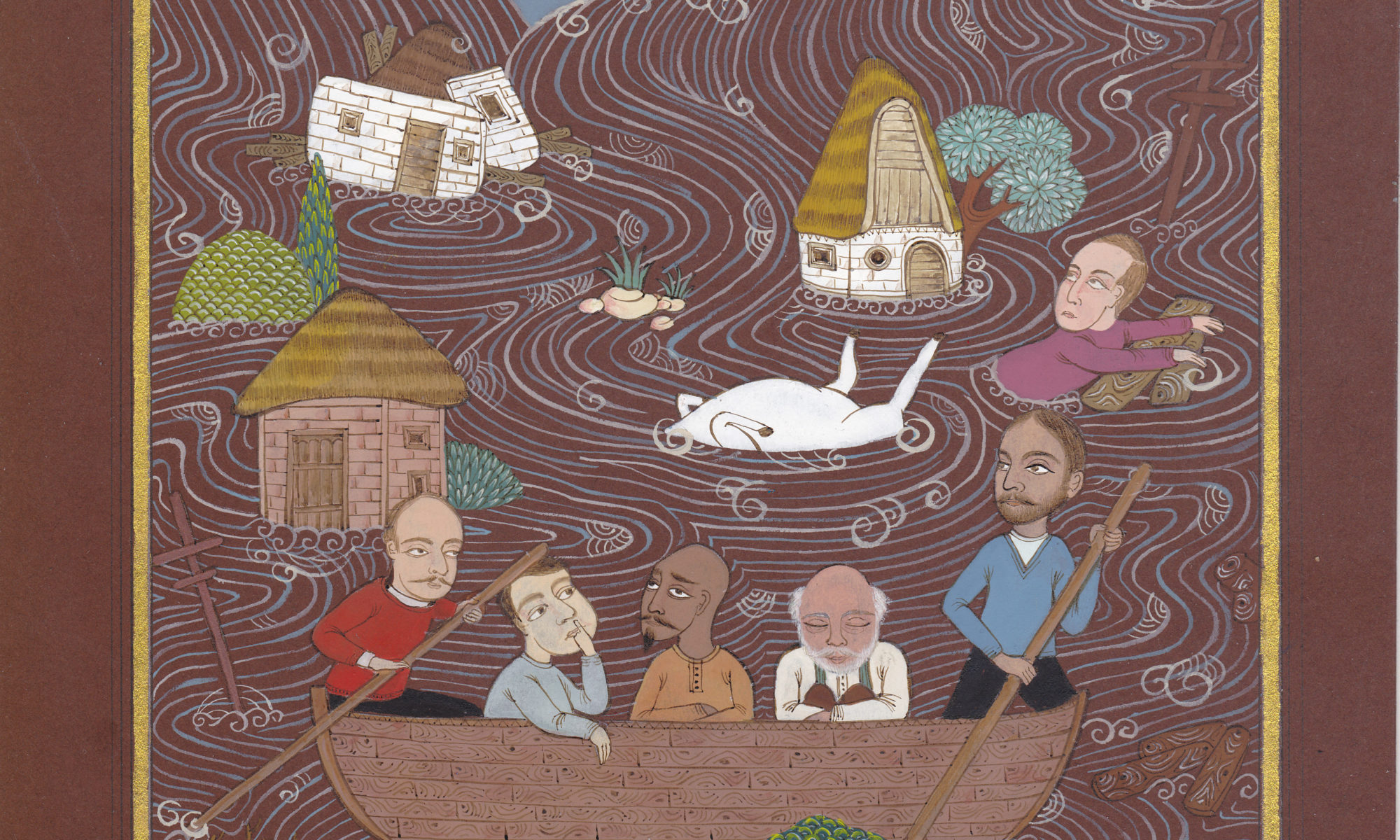 All day long the South wind blew rapidly and the water overwhelmed the people like an attack.  No one could see his fellows.  They could not recognise each other in the torrent.  The Gods were frightened by the flood, and retreated up to the Anu heaven.  They cowered like dogs lying by the outer wall.  Ishtar shrieked like a woman in childbirth.

The Mistress of the Gods wailed that the old days had turned to clay because she said evil things in the Assembly of the Gods, ordering a catastrophe to destroy the people who fill the sea like fish.  The other Gods were weeping with her and sat sobbing with grief, their lips burning, parched with thirst.

The flood and wind lasted six days and seven nights, flattening the land.  On the seventh day, the storm was pounding like a woman in labor.   The sea calmed and the whirlwind and flood stopped.  All day long there was quiet.  All humans had turned to clay.   The terrain was as flat as a roof top. Utnapishtim opened a window and felt fresh air on his face.  He fell to his knees and sat weeping, tears streaming down his face. He looked for coastlines at the horizon and saw a region of land.  The boat lodged firmly on Mount Nimush which held the boat for several days, allowing no swaying.

The sheep and the goats of the nomadic herders swim, heads thrust skyward in panic, bleating.  After a while they drown and slip to the bottom.  Days later they bloat with methane gas and float to the surface where they are eventually blown to the edge of the lake to decompose. After several months, all that is left of them is a felted mat, greasy with lanolin and flecked with salt encrusted crickets. It is springy to walk upon this spongy edging.

The villagers stay put too long, against the warnings of nomadic herders who are fleeing, wild eyed, for upland pasture. Those villagers that can, strike out, a few strokes at least. Those that can’t and that is the majority, flail wide eyed, and then with an unintentional gracefulness wave a silent farewell and breathe deeply of brine.  They sink slowly, gyrating into the darkness, in a few days they too will bloat and once again return to the air, to have their eyes picked out by seagulls and small fish.

Further to the East the level of the lake has suddenly changed, lapping closer to the settlement, even floating free a couple of fishing boats from the Strand. Offshore the water is marked by a channel of ochre red, fanning across the horizon, this has never been seen before, not even by the village elders. Looking to the North, this stain moves slowly across the horizon from left to right from West to East, towards the rising Sun.

Five men from the village row out, they spend an entire day, drifting Eastwards in the red swirl, a swirl of mud with the tang of salt.  An oarsman dips his finger and brine vibrates on his lips.

To the West entire communities watch on as the high pasture that stretches between the narrow salt sea and the sweet water lake down in the valley is riven by a torrent that is rapidly cutting a chasm through the rich soil, devouring the land.  Every day it widens, tearing away trees, huts and occasionally people, cutting off all movement to kinsfolk stranded on the far side of what is now a violent river in full spate – a river of salt that throws a dark stain into the lake below and snakes to the horizon.

All in whose nosethrils was the breath of life,
of all that was in the dry land, died.
And euery liuing substance was destroyed,
which was vpon the face of the ground,
both man and cattell, and the creeping things,
and the foule of the heauen;
and they were destroyed from the earth:
and Noah onely remained aliue,
and they that were with him in the Arke.

I visited years ago and recall the walk up from the steamer jetty, past a few rundown fish restaurants, to a mountainside wild and deserted. The road defeated, surrenders itself to a rocky footpath which winds to the summit and the ruins of a Genovese Castle.

A crows-nest of a place, looking to the West the Channel shimmering back to the minarets of Istanbul, to the East the sparkling expanse of the Black Sea.  Far below a fleet of sardine boats inscribe vast circles of net on the surface.

Nowadays the ferry dock is crowded with tourists. The fish places have reimagined themselves with encrustations of glass and marble but have lost their charm and their good value in the process.  The Genovese castle remains but it is now reached by a concrete path lined with cafes, all the way to the summit, which now has a festival air, the view devoured by digital cameras. Down below the sea glitters where the Argo first sailed out of the Bosporus and into the Black Sea.