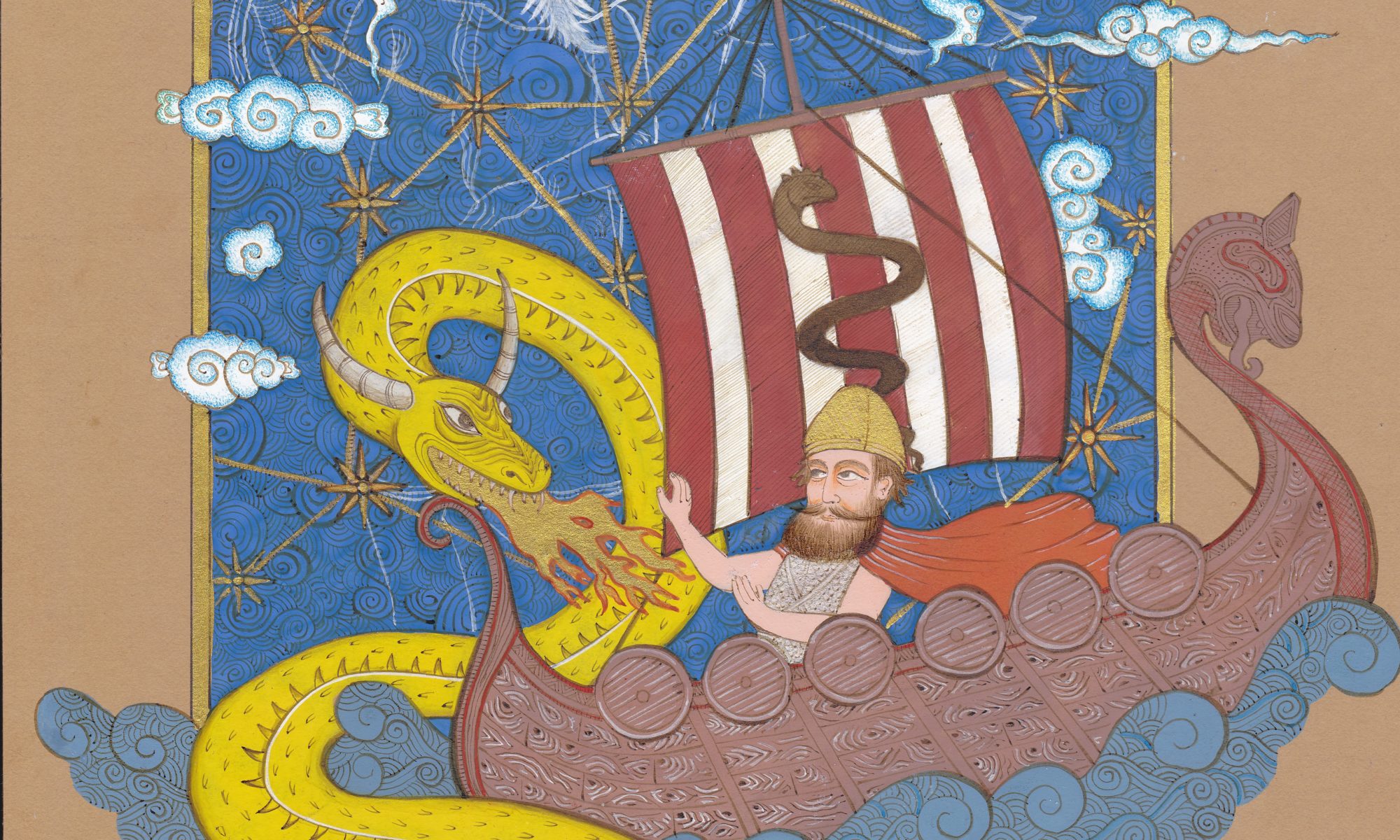 Reality is a very noisy place, both acoustically and cognitively so Raknar might have mused had he been given the opportunity to be reincarnated as a designer of speaker enclosures for Bang and Olufsen, here in his home town of Struer, in what is now called Denmark. Raknar however, had made a fatal acoustic error much earlier in his career involving the sweet sound of an imaginary bell, for Raknar had fallen in love with a subjective tone and this was to be his undoing.

It is Spring 894. The helmsman sweeps the steering oar across the ship’s stern. The bow describes a slow arc bringing the village squarely into the wooden gaze of the Drakehodt. The hull glides between the dwarf oaks that line the salt marsh and the crew trim the sail for landfall. At one nautical mile from shore the gaze of the figurehead is acknowledged by a clamour of bells, sounding the alarm from the octagonal tower of the church. This is all that is happening today, a fierce prow staring at ringing bells. Beyond, dark silent forests stretch over the coastal hills to nowhere.

Bell, Bellum, Bellow, English resounds with memories of havoc. Every bell-rope straining in chaotic peal, every inhabitant scrambling for the protection of the underground crypt, hollowed out in the sixth century by Irish Monks. But out on the marsh Raknar the Norse leader is hearing something new – a sweet harmony singing above the normal tones of the church tower, he will have this phantom bell as his prize .

This southern littoral is poor pickings, the raiders work it every four years, leaving sufficient on each occasion to allow the peasants to reestablish their livelihood. Normally the church is passed by, acknowledged as a refuge in this cycle of brutality but this time the Norse storm the tower to take the new, sweet singing bell.

They manhandle it out of the belfry, hauling it across the water meadow and down to the hardstanding where the ship is beached. They heave its mass over the gunwhale and secure it amidships behind the spruce mast.

When havoc subsides the crew return, pigs, sheep, chattels and women in tow, the ship is cast off and the prow shouldered from the hard. The oars are unshipped and the vessel turned into the southwesterly breeze blowing from the channel. Quietly now, the Drakkar eases away from shore into deep water, the commander gazing happily at his bronze prize.

But as the vessel reaches the dwarf oak forest, the captive bell sounds out a single tone and melts through the hull of the ship ~ they say that the raiders never visited again.

Many years later the villagers attempted to retrieve the bell, from it’s resting place ~ the Bell-Hole. They employed a white witch who insisted on working with a team of pure white oxen, hauling a snow-white hair rope. The bell was located by a diver, the rope attached and the bell mostly surfaced before the rope snapped, revealing a single strand of black hair in its weave. The bell remains in its bell hole to this day.

His dragon with her sails of blue,
All bright and brilliant to the view,
High hoisted on the yard arms wide,
Carries great Canute o’er the tide.
Brave is the royal progress — fast
The proud ship’s keel obeys the mast,
Dashes through foam, and gains the land,
Raising a surge on Limfjord’s strand.

Two hundred years after the Norse raiders first listened to the harmonics of this virtual bell King Knut laid his eight year old daughter to rest in the crypt that had sheltered the villagers. He was ruler over the short-lived Northern Empire – and regarded by his chiefs as omnipotent.

Knut, a pragmatist, found this acclaim to be irksome and so arranged a spectacle for his chiefs to demonstrate his fallibility. Setting a wooden throne on the very hardstanding so frequently scored by Norse keels, Knut calmly sat eying the flooding tide, commanding it, in full earnestness, to ebb. The brackish waters however would have none of it and so Knut was eventually obliged to wade from his throne. Knut re-established his position within the hierarchy of nature, as a mere King of men. Knut’s Empire was to survive for some eighty years on Northern Europe’s icy fringes.

But what of Raknar and his ship Drakken with or without that prize bell? On the benches sixty-eight men bend their backs in unison, eager to quit this bewitched place. Pulling hard into the main channel of the harbour that the Romans once called Magnus Portus they ride the surf breaking across the bar and into the open sea. To the South-West the green island, Vectis Insula and the prevailing wind. Helm to Starboard and the Drakken heads due East with a stiff following wind. The oars are shipped and the square sail set, as she runs down the white horses towards the North Sea, the crew hunker down to eat, joke, sleep and manhandle the women captives.

Draken is sailing free into an alternative future, into an oblivion so deep that it has vanished from history.

The stories begin to spin, to weave a rhythmic web of prosody entwined with the surge of the keel over the swell. In the Northlands it has been an endless winter for as long as any on board can recall, after all, is this not why they are raiding these Southern lands! Some say it is the start of Fimbulvetr, the winter of winters, the end of all summers, when everything goes astray, when people will be in perpetual conflict, food will be scarce, morality and tradition will vanish and the law will break down.

Old one-eye tells them of inexplicable happenings with Mother Earth; Skoll the Wolf will devour the sun and the days shall grow dark and his green-eyed brother, the wolf Hati will likewise eat the Moon, making the nights darker still. The wiser on board are telling that next will come earth-shudders breaking all the bonds in heaven and releasing the wolf Fenrir to range the land and that the serpent Jormungand who lives in Midgard will thrash and writhe in the sea, causing terrible storms and floods as it makes it’s way landward. Such huge waves, such breakers, that the ship of the giants commanded by Naglfar will be set free and they will set sail, battle ready and blood thirsty. Moreover, the old warrior with one eye tells the spellbound crew, the storm will rage so hard that it will even reach the land of the dead and water will flow once more under the keel of the ship of dead souls, which will set sail with crazy Loki ranting at the steering oar.

Then all will go to hell in a cataclysmic battle, scorching the earth until it sinks into the sea and quenches all life.

The crew huddled against the pine planks are mesmerised, jaws agape, their battle-hardened hands white knuckled. The lookout cries Ahoy as two ships on the horizon bear down, cleaving a vast green-grey wave!